Of all the recipes I thought I might be posting here, this would have been among the last. I regularly claim not to like pickled food, but that was before I went to Martha de Lacey’s supper club and had some absolutely delicious kimchi! I still don’t think I’ll be reaching for the pickled onions anytime soon, but am making a tentative foray into the world of fermenting.

Until Martha posts her recipe (promised on her new subscriber Instagram account, a clever move to stay solvent for the duration), I used a recipe for quick kimchi that I found online. I made it yesterday and, although we had a first taste with our lunch today, it really needs to mature for a week or two.

Reporting back one week later: I kept jar one on the bench for a few days, after which the flavour was much stronger and more developed. I preferred jar two that went straight into the fridge – the flavour had still deepened, but it was a bit less sharp – but my partner thought jar one was more interesting. So, if you try this recipe let me know what you think!

These are half the original quantities, as I’m still experimenting, but if there are more than two of you, or you already know you love fermented cabbage, then I’d double them back up again. And I put in more ginger, carrots and radishes because we like them, and omitted the tablespoon of fish sauce because I’m still working up to the full-on, stinky version of kimchi!

Shred the cabbage, not too finely, into a bowl and mix in the sea salt, mixing and scrunching it with your hands. Cover and leave for about an hour.

Crush the garlic and peel and grate the root ginger. Mix together with the chilli paste, sugar and rice vinegar (and some fish sauce if you wish).  Trim and grate the radishes and carrots and finely shred the spring onion. 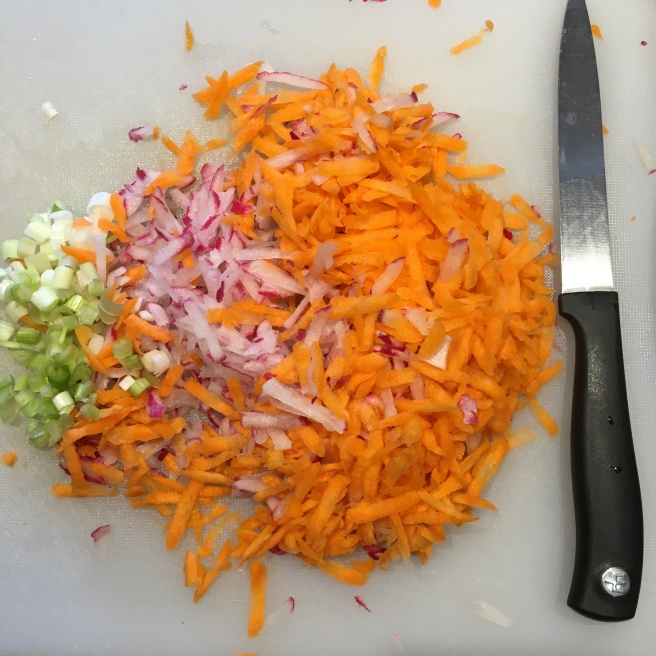 After an hour, rinse it and dry it by spinning in a salad drier or by tipping it into a clean tea-towel and rolling up to press out the water. Tip back into the rinsed and dried bowl and mix together with the radishes, carrots and spring onion. Then mix in the kimchi paste – I did this with my hands as it is so much easier (and we’re all washing our hands a lot now anyway!).

I then left it to itself in the bowl for quite a while while I embarked on a fruitless search for the large kilner jar I know I have somewhere, before giving up and packing it into two jam jars. Having given it all 24 hours at room temperature, I am going to keep some out on the bench and put the second jar in the fridge. I will report back on how it tastes next week!

One thought on “Quick basic kimchi”