This easy and comforting supper recipe is adapted from Nigel’s midweek dinner in The Observer a few weeks ago. Having made it several times, I wanted to put it on the blog so that I don’t forget it. The original has smoked bacon in it, and I have made it with bacon and with pancetta lardons. The creamy curry sauce is nice but indulgent, so we have also had the parsnip cakes with just a pile of fresh greens too. You could liven up your greens – broccoli or purple sprouting would be good – by turning them in a little oil in which you have lightly cooked a sliced chilli. These quantities are for two moderate portions, though I have cut the quantities dramatically as, even when ravenous, I can’t put away 500g of parsnips!

For a vegan version, pictured, I used slowly cooked onions to flavour the parsnip cakes instead of bacon, and served it with the quick tomato sauce (though you could use Oatly crème fraîche or soy cream to make the curry sauce). I also wonder if it would be good to add some chilli flakes to the onions, but I haven’t tried that yet.

Note that the parsnip cakes need to rest in the fridge for 30 minutes after you’ve made them, which caught me out first time round. It is ideal if you can prepare ahead and have them ready to go for a quick supper, but less so if you start the recipe when you’re already hungry!

Peel and trim the parsnips and cut into small-ish pieces. Steam over boiling water for 20-25 minutes until the parsnips are soft all the way through. Meanwhile, finely chop the bacon or onion and cook slowly in a heated frying pan (with some oil if using onion) until golden. Put aside. 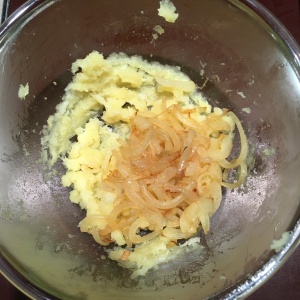 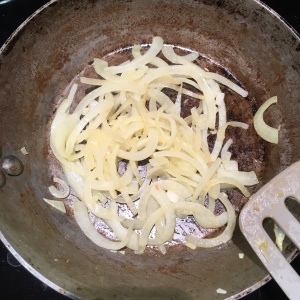 Once the parsnips are totally soft, mash them in a bowl and mix in the bacon or onion. Season to taste with salt and pepper. Shape into four cakes with your hands and chill in the fridge for 30 minutes. I did cook them straight away once (did I mention being caught out?) and they were fine – just a bit more fragile in the pan. 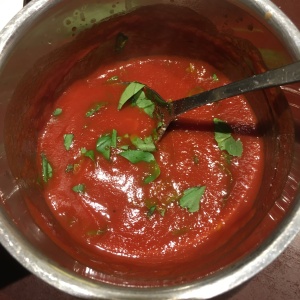 Heat some oil in a frying pan and cook the parsnip cakes for about 4 minutes each side until they are browned and crispy.

While they are frying, cook your greens and make the sauce. Either warm the cream and stir in the curry sauce, or heat the chopped tomatoes and season with the vinegar and chopped basil or parsley.

Serve the parsnip cakes with the sauce poured around and the greens on the side. Quick, cheap comfort on a plate.